Aquingwak was born and raised in Thule, a thriving settlement of Inuits until 1953. When the United States came to build a remote army base on Greenland’s shores, they choose Thule as the most strategic position. Instead of building elsewhere, they preceded to relocate the population of Thule dwellers in order to construct the base. Thule became Qaanaaq, sixty miles north, and the northern most municipality on the planet continued on. Aquingwak remembers pieces of the great move from his fading childhood memories. 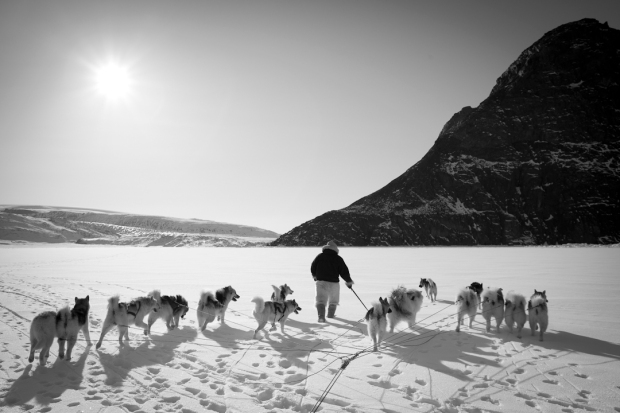 Known was one of the best hunters in the community of 800 people, Aquingwak takes great pride in his sled dogs and life as a hunter. With a gentle and calm presence, he leads his dogs steadily along the frozen sea ice.

Aquingwak untangles the leads for his dog sled team beside a polynyas. Polynyas are areas of persistent open water where there is little to no ice, despite the below freezing temperatures. Due to the actions of ocean currents, they are critical feeding areas for a number of species. 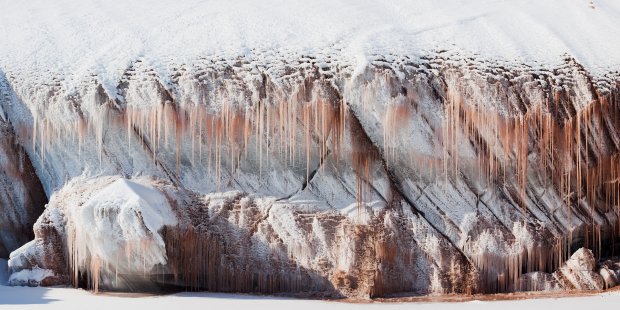 Glaciers are made up of more than ice. Multi colored particles of minerals and rocks are embedded in the twisted ice of the glacier, exuding shades of red and brown.

One common glacier feature seen all around the world are moraines, long dark bands of rocks and minerals on top and along the edges of glaciers. These form as the tremendous weight and power of the glacier pushes along rocky debris and grinds up anything it touches. A delicate mixture of reds and blacks are frozen within the blue ice.

Not far from the glacier head, ice caves fill the expansive landscape. During the summer when the glaciers begin to melt, ice caves are formed as the water spills out from under the glacier. This cave still in the grips of winter is decorated with delicate icicles colored by minerals. 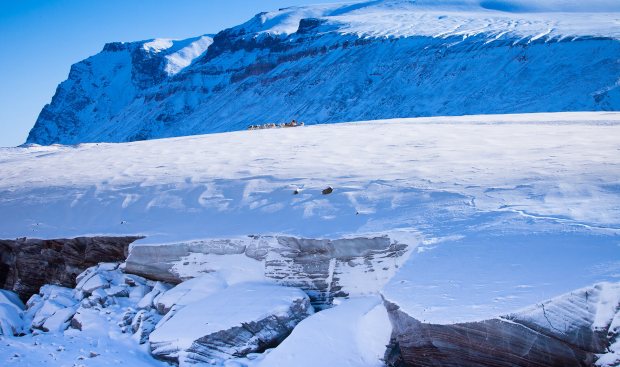 Aquingwak drives his dog sled team across the top of a vast icecap with the thick mineral colored edge of the glacier exposed in the foreground. The harshest terrain can also be the most magical. 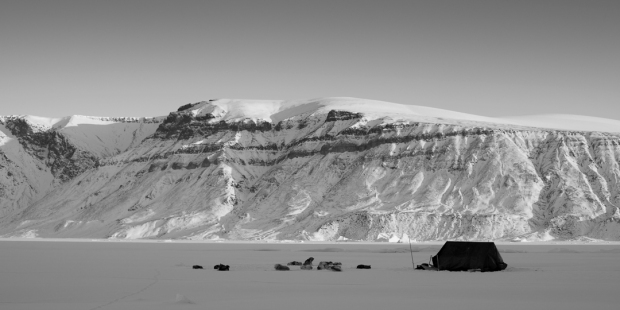 After covering many miles on the sled, camp was set up on the sea ice. Staking a tarp over the sled and lighting a single burner gas stove, Aquingwak and Justin both slept on reindeer furs atop the sled. Although some small single room cabins do exist in places along the ice edge, many nights are spent sleeping in this style.

Inside the tent, Aquingwak smiles as the stove fills the small tent with warmth and the promise of dinner.

Arctic sled dogs are what they call ‘working animals’. Intensely disciplined and extremely hardworking, the dogs work for fresh seal meat and slumber on the ice. It is illegal to have an arctic dog south of the arctic circle.

Dressed in polar bear pants and traditional kamiks made of seal skin and lined with polar bear fur, Aquingwak prepares the dogs for another day trekking across the frozen sea. 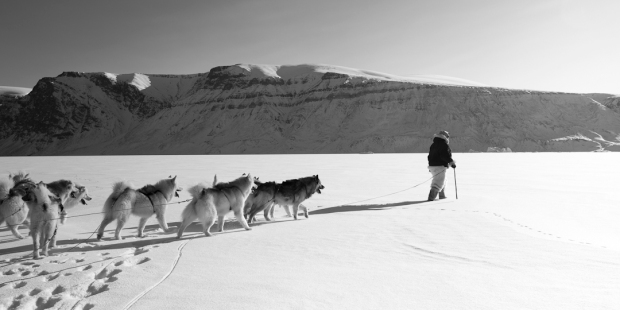 The silence from the expanse of white and blue ice calms the continually racing mind. There is a sense of solitude and isolation in the serene and barren landscape. In that space, you can truly feel free.